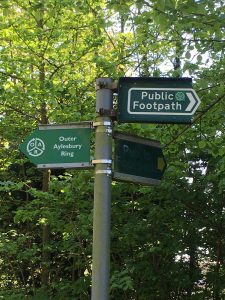 The DEFRA Magic Map is great!  You can tweak which layers you want to see:

Please see below for several walks around Whitchurch:

This is a lovely walk around the village, taking in our history along the way!  Some parts will be muddy after rainfall.

Set on the escarpment overlooking the beautiful Vale of Aylesbury and the distant Chiltern Hills, Whitchurch is a village full of history and ideally sited as the centre of many fine walks that take advantage of it’s position and the surrounding countryside.

This walk is a gentle stroll that takes in the historic High Street, the Castle Mound as well as many hidden gems of the village and should take about an hour to complete.

Directions are given as guidance and include historical notes which are intended to make your walk more pleasurable and interesting. The letters refer to those on the map of the Village Centre. 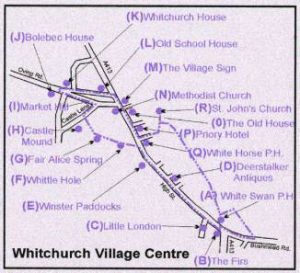 [A]   Start at the White Swan pub, which was The Queen’s Head Inn until 1785.  There was a duck pond near this site and tradition has it that a ducking stool was used on the pond.

[B] Crossing the road you come to The Firs. The current house was erected in 1897 on the site of an earlier building of the same name. The high wall was added in 1928. Between 1939 – 1946 The Firs housed the secret Ministry of Defence department MD1, known as Winston Churchill’s “toyshop”. Over 250 staff developed and produced 26 different types of weapons.

[C] The road by the side of The Firs, is called Little London and was the centre of lace making and silk weaving in the village. These were prominent cottage industries in the 1800s.

[D] As you walk up the High Street Deerstalkers is on the far side. Now an antique shop it was once three cottages. Note the fine herringbone brickwork.

[E] A little further up the street on the left is Winster Paddocks. Once the Cock Inn this was a coaching inn as early as 1636. From 1914 until 1989 it was a butcher shop.

[F] At the telephone kiosk turn left down the footpath. Walk up to Spring Cottage and you see Whittle Hole spring. This is one of many in Whitchurch and was the source of fresh water for the village up until recently. Carry on down the path, over the stile and through the meadow. To your left is a good view of the Vale of Aylesbury. Over the stream and bear right, you come to …

[G] Fair Alice Spring, which rises out from beneath the site of the old castle. It is reputed that this water has therapeutic properties. This small stream, which has never been known to dry up, joins with others and once powered a 26 feet diameter wheel at Dunn Mill at the bottom of Weir Lane.

[H] Above you is the Castle Mound. Built in the 12th century by Hugh de Bolebec the castle was the largest of eighteen such Motte and Bailey castles in the county. It is reported that in 1264 it covered 6 acres. During the Civil War (1642 – 1651) it was destroyed on the orders of Oliver Cromwell. Evidence of the old stones can still be seen in many buildings in the village.

[I] Continue through the field to the kissing gate beside the thatched cottage. Turn right into Castle Lane and then left up Market Hill which was once the main street through the village. In 1245 the Earl of Oxford received a grant to hold a weekly market here and a yearly fair on the Monday of St John the Evangelist. This fair was resurrected in 1979 and is held on May Day and known as the May Feast, although it is more likely to be held on the Recreation ground these days!

[J] When you reach the Oving Road continue up a little way before crossing the road to Crabsgrove. From here you can look back over to Bolebec House with it’s thatched barn. It was here that the celebrated artist Rex Whistler (b 1905) lived. From the garden of Bolebec House he painted the picture “The Vale of Aylesbury”. Whistler was killed in Normandy in 1944.

[K] Turning back down the Oving Road you pass Whitchurch House dating from 1620. It was here that Joyce Anstruther (1901 – 1953), better known as “Jan Struther”, once lived. She is remembered for her book, Mrs Miniver, published in 1939 and later made into a major film. The name Jan Struther is still familiar today because of her hymns, particularly Lord of All Hopefulness.

[L] Down the road , before the roundabout, you see Old School House. In fact, this 16th c timber framed house, the building nearest the road, was the master’s house. It was over restored in 1864 when the school, the brick building set further back, was built. The school was recently the Legion Hall and youth club, but has been put up for sale in 2020.

[M] Cross over the roundabout to The Village Sign which was erected on New Years Day 2000 to mark the Millennium and carved by a local craftsman. Rest awhile on the nearby seat and look over to Market Hill. Diagonally to your left is …..

[N]…the Methodist Church, built in 1844. It’s oak pews and pulpit were all made in the village and the organ was originally built for the Duke of Wellington.

[O] To your left is The Old House. The original building was probably built in 1400 by monks of Woburn Abbey when they took over the parish church. At a later date it was divided into five separate dwellings (tenements) known as Lime Cottages until converted into one large house in the 1920s.  It is now used as offices.

[P] Walk down the path by the side of the Old House, along the High Street, and you come to the Priory Hotel. This building dates from 1360 and was the Old Courthouse until 1900. Stocks were originally outside this building.

[Q] Further along the High Street is the White Horse.  A public house had been on this site since before 1683, but in 2011 he tenancy was relinquished and it has now been turned into a fine private house.

[R] Walk up White Horse Lane, passing the new St John’s Hall and you come to St John’s Church. There has been a church on the present site since the end of the 10th century with the current church dating from 13th century. The 14th century tower has a peal of six bells dating from 17th and 18th century. Note also the large elaborate sundial. The Parish Map is on display inside the Church, along with a written guide to the inside of the church.  You might look at the symbols on many of the pillars – carved by Jesuits many centuries ago.

[S] Leaving the churchyard by the same gate as you entered turn left, through the metal kissing gate, along the path and across the field towards the cricket ground. As you approach the next kissing gate look left towards Creslow Manor in the distance. It was reputed to have once had the largest field in the country. Named Creslow Great Ground, or Pasture, this field provided grazing for cattle which were supplied to the Tudor royal table. Creslow also contains the oldest domestic house in the county of Bucks. The current house was built in 1330 with 16th and 17th century additions. From 1939 until recently the masts of a Foreign Office radio station were visible in the fields of Creslow.

[T]  Walk past the cricket pavilion, through the five bar gate and through two more kissing gates, following the path to the lane either turn right, back to the White Swan, or, weather permitting, take the path to your left, over two stiles into the area where Whithurch bricks were made until 1928.  This is now a haven for wildlife.

Return to the pub via Bushmead Road.

This leaflet has been compiled by Whitchurch Historical Society and illustrated by local artists. (Edited in 2020 by MP).

Illustrated leaflets are available in village shops and pubs.

Other walks in and around Whitchurch:

Our section of the Outer Aylesbury Ring is between Cublington and Oving – please click here for more details:

Something a little different! An archeological/historical walk around the village: